One day it's Bach or an opera, the next it's a 'Matrix.' Southern California's musicians have long moved between the concert hall and the movie studio.

By Victoria Looseleaf
Special to The Times

That Grant Gershon, pianist, tenor and current music director of the Los Angeles Master Chorale, believes in the positive effects classical music can have on a child's development is understandable. 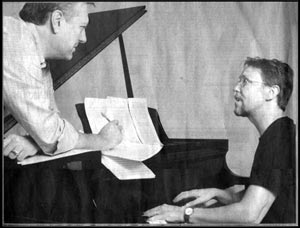 That Gershon should take his very pregnant wife, soprano Elissa Johnston, to see the first "Matrix" film when she was a week past her due date, well, that was another matter entirely.

"We went with the express intention of seeing if the film could induce labor through the sheer force of the soundtrack," Gershon explains in all earnestness.

Mighty as the Don Davis score was, the baby didn't come for another week. But this anecdote may suggest the enduring synchronicity between Hollywood and the loftier world of classical music. Indeed, Gershon, 42, who is entering his third season helming the 40-year-old chorale, can also be found playing piano on numerous film scores.

His most recent gig? "The Matrix Revolutions," also composed by Davis, which, in another synchronistic turn, premiered at the Walt Disney Concert Hall, home to both the Chorale and the Los Angeles Philharmonic. Gershon, who says the film's score is among the most complex he's played, is one of the current crop of classical composers, conductors and musicians who straddle this cultural fence.

The early history of such crossover talents is dominated by the triumvirate of Max Steiner, Franz Waxman and Erich Wolfgang Korngold. By the mid-1930s, all three had moved from the traditional classical music sphere in Europe to the more lucrative Hollywood arena; all eventually won Oscars.

It was the Czech-born Korngold (he died in 1957 at age 60) who had been the most promising classical composer. He not only impressed Strauss, Puccini and Mahler with his compositional prowess at age 9 but went on to write operas and symphonic music before achieving Hollywood fame with swashbuckler films such as "Captain Blood" and his Academy Award-winning "The Adventures of Robin Hood." But whether because his über-romantic style was deemed passé or because he was branded a "film" composer, Korngold was unable to match his earlier classical triumphs when he returned to Europe after the war.

In the decades since, a number of composers have successfully crossed back and forth between the worlds, including Philip Glass and Tan Dun. Today's newer artists, though, are proving particularly adept in this regard.

Davis, who cites Korngold as an influence, is prominent among them. Not only has the 46-year-old composer written six hours of music for the "Matrix" franchise, but he's writing an opera, "Rio de Sangre," with poet-novelist Kate Gale. Parts of the work, the story of a Latin American dictator, have been commissioned by Gershon as an oratorio to be performed in the 2005-06 Master Chorale season.

The Anaheim-born Davis, who began writing music at age 12, didn't come to opera, however, until he had graduated from UCLA with a degree in composition. And opera also took a back seat to his work in television, where he won an Emmy for scoring the series "Beauty and the Beast" before he segued into films. He orchestrated "Titanic" and "Toy Story," but it was his score for the offbeat thriller "Bound" — gritty jazz with lushly orchestrated soundscapes — that cemented his relationship with directors Larry and Andy Wachowski, who then tapped him for what would become the "Matrix" trilogy.

Davis says he knew that the first "Matrix" would be a hit and that with that success would come freedom to pursue more concert music. "I was impressed with what Larry and Andy took — a thinly veiled Christ story — and made an action adventure out of it. It's a discourse on philosophy that was well-integrated, meaning the movie had something for everyone."

So, seemingly, does Davis' music. The composer, who can talk as easily about Bach's "Goldberg" Variations as he can about the "Godfather" movies, has created nearly operatic scores for the "Matrix" films. Enamored of texture and sonorities, the composer made use of three grand pianos in the first film, with one instrument "prepared," à la John Cage. Pianist Ralph Grierson rigged the instrument with rubber tubing, metal screws, fishing wire and coins between all the strings to produce odd percussive sounds.

"It was kind of a neat effect," Davis says of the unique timbre. "The result was as if the piano were being put through a digital sound processor, but it was completely acoustic."

Gloria Cheng was the other pianist besides Grierson on the first "Matrix." But Cheng, who also played on the subsequent two films, considers herself primarily a classical musician. She has performed with the Los Angeles Philharmonic for 20 years as an extra pianist and played at Disney Hall's opening galas. In addition, she is in demand as a soloist. Last month, you could have caught her in the Piano Spheres series and with the new music group XTET, for which Davis has written a number of concert works over the years.

Cheng says that 99% of studio musicians are classically trained and that to stigmatize film work is counterproductive. "It's a fascinating art form unto itself; it's a different game. What I've devoted my life to is working with contemporary music and working one on one with a composer whenever possible. To live in Los Angeles and exclude film composers from the mix would be ridiculous.

"Playing the piano," Cheng adds, "that's what I like to do. Don's score for 'The Matrix' is rich and haunting. It's beautiful writing for orchestra. I think Don is at the pinnacle of the field and always has been. I've played his concert music. He wrote a two-piano piece for me and Vicki Ray."

Ray, in fact, recently premiered Davis' latest concert work, "Lunatic Air (On Fire)," the title being an anagram for the 21-year-old California EAR Unit. A member of that new music group for a decade, Ray, who is on the piano faculty at CalArts, says she doesn't do many studio gigs. But she did play on the last two "Matrix" movies.

"L.A. is an unusual town that way," she says. "You can play a film score by day, a Beethoven piano trio at night and rehearse avant-garde music in the morning. I like being able to stretch and play in a lot of different styles."

So too does the New Hollywood String Quartet, an ensemble that pays homage to the original Hollywood String Quartet, crack studio players whose partnership lasted from 1947 to 1961. (Their ranks included violinist Felix Slatkin and cellist Eleanor Aller, parents of American conductor Leonard Slatkin.) Paul Cohen plays cello in the new quartet, which he founded two years ago with violist David Walther and violinists Clayton Haslop and Rafael Rishik.

In addition to doing studio work, the group has a performing repertory that includes a piece commissioned from Davis, "Wandering," that The Times called "moody" and "engrossing." These four musicians also tackle Hollywood from a decidedly different angle: They asked film orchestrator Randy Kerber to write "Fantasy on Themes from 'North by Northwest,' " based on Bernard Herrmann's music for the classic Alfred Hitchcock film. The 13-minute suite riffs on the Herrmann score as if on steroids: Extremely energetic, with moods shifting from violent to tender, it has lately been accompanied by film clips during performances by the quartet. They played it at the Vermont Mozart Festival recently and will perform it in Costa Mesa in February.

"The music came first," Cohen notes, "but by showing parts of the movie, it's different and connects to some of the more popular interests people have. Today there are so many multimedia crossover performers, like Yo-Yo Ma. We're trying to be a part of that, because the reality is, unless you've been around for a long time, very few string quartets make a living just playing concerts."

Times music critic Mark Swed acknowledges the many impressive classical musicians in the past who played for films. "And that hasn't changed today," he says. "There are also very fine musicians who get caught up in the film thing and become hacks. This just shows that not all the people who do film music are hacks. Some of them remain very engaged and arresting musicians. Gloria, Grant and Vicki are among the most impressive musicians in town."

Cellist John Walz is equally busy. He performs with the chamber groups Camerata Pacifica and Pacific Trio besides being principal cellist with the Los Angeles Opera Orchestra. Walz has also made recordings of the Dvorák and Shostakovich cello concertos with the Czech National Symphony. Yet, he says, he plays on 30 movie soundtracks a year.

"There were 12 celli for 'Matrix Revolutions,' " he says, "and we all knew each other."

Davis conducted nearly 200 musicians, including 80 singers, for the final "Matrix" installment. And while the composer would have liked Gershon to conduct the chorus, he says, "it seemed outrageous to have this great choral conductor tell the singers to sing 'ooh' or 'aah.' "

Still, Gershon is no stranger to conducting film scores. He ended the Master Chorale's last season in the Dorothy Chandler Pavilion with an entire program of movie music, including Cliff Eidelman's "Triumph of the Spirit" suite from the 1989 movie of the same name.

Eidelman, 38, has scored nearly 30 films. His concert piece "Wedding in the Night Garden," which the Master Chorale also performed in 2002, will be reorchestrated and expanded for next season. Scored for strings, choir and mezzo-soprano, the 20-minute piece has a mystical, Arvo Pärt-like quality.

"My film work," Eidelman points out, "gives me exposure and makes people aware in a way that makes it possible to meet people like Grant."

On the flip side, movie work has led 34-year-old, Montreal-born Christophe Beck to all but abandon "serious" music. Beck wrote the scores for eight of this year's films, including the romantic comedy "Under the Tuscan Sun" and the film noir "Confidence."

This is a far cry from his days at Yale, where he earned a music degree in 1992 and received a prize for his graduation project, an opera based on Edgar Allan Poe's "The Tell-Tale Heart."

Beck, who also won an Emmy for scoring the TV series "Buffy," says: "You have immediate opportunities to reach a lot of people. In academic work, you're mostly writing for other composers. And this seemed like a much better way to make a living."

Being able to move freely between disparate musical worlds works fine for Gershon, whose piano chops are as good as his conducting ones: In 1996, he performed "Hallelujah Junction," a two-piano work composed by John Adams for him and Cheng. Around the same time, he easily tossed off the theme to "The Brady Bunch," performed in the style of Beethoven, for a Delos International CD, "Mozart TV."

"It's never been a problem for me," Gershon says, "partly having grown up in Los Angeles. There's so much work for a musician and so many different kinds of genres for players and singers to be involved in. It's interesting that composers who are part of the classical world's elite are attracted as well to the world of film."